Last week the Dutch National Plan Open Science was presented. The plan was written by a team led by my colleague Wilma van Wezenbeek (TU Delft Library Director). The key ambitions of the plan are: 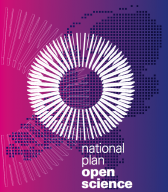 Important is that the plan is not only focusing making publications open access, but also change the evaluation and reward system for researchers.

The key ambitions are divided into sub ambitions:

Next to the plan there was also an open science declaration signed by many organisations:

Open Science is more than research

An important thing I noticed when reader the plan is that it only focuses on research. Open Science is an umbrella term encompassing a multitude of assumptions about the future of knowledge creation and dissemination, including education. Benedikt Fecher & Sascha Friesike (2014) wrote a book about this, in which they identified five Open Science schools of thought:

For me Open Science is making science available for everyone. Education is an important way to share knowledge and learn others how to apply this knowledge.
I notice that policy makers in government don't like a broad definition. The mean reason is that different departments have to work together for this. A narrow definition makes it easy, but i'm not sure if we are really changing the mindset of researchers and educators.  Going trully open means a change in culture within the academic world.