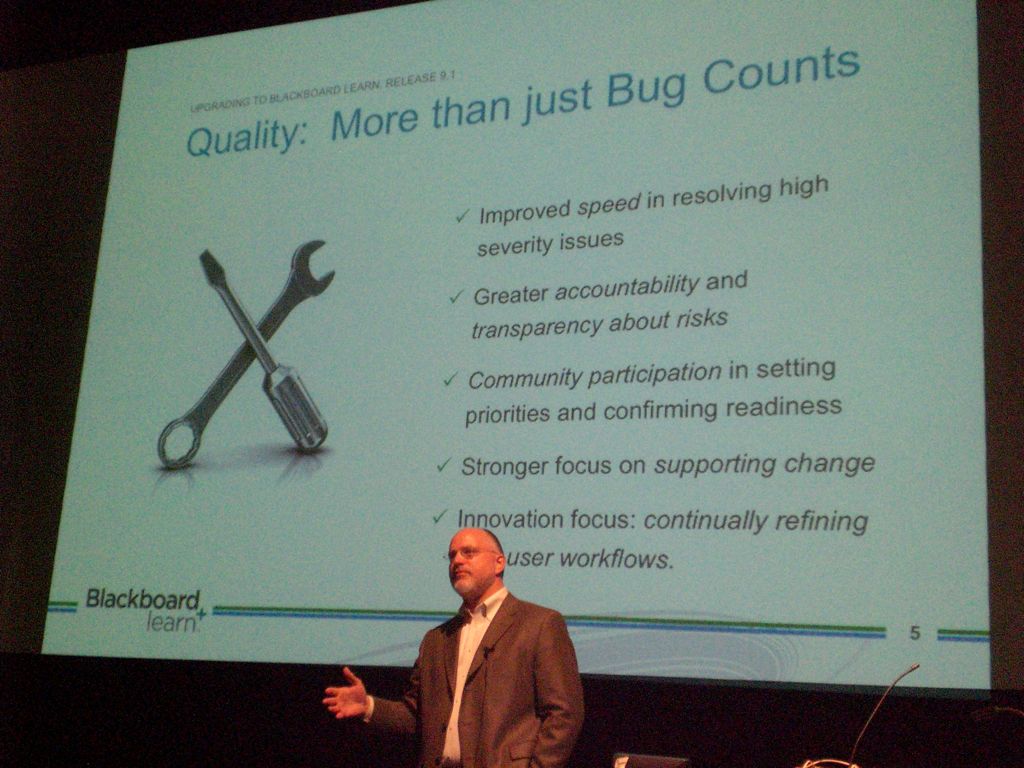 In October last year I had a meeting with Ray Henderson. At that time he just had started as President of Blackboard Learn. On behave of the Dutch-speaking Blackboard user group (NLBBUG) from the Netherlands and Belgium, I discussed a couple of subjects that needed improvement according to the user group.

Internationalisation
One of the issues was that Blackboard is proclaiming that they are a international company, but that still have problem with international numbers and ordering of names with prefixes. For example "van der Berg" has to be listed with the "B" and not the "V".

New fields 'Other Name' and 'Suffix' have been added to user creation and edit pages. These were added to alleviate issues for clients in countries where the Last Name Prefix is commonly used but should not be used for sorting. (AS-144005)

So within a year of my meeting with Ray, the issue is resolved. Unfortunately, for most Dutch institutions this release was too late for this academic year, so our users still have to wait for it.

Stability of releases
Another issue we discussed last year is the stability of the product. The last couple of months we did a lot of testing with the latest version and I must say that the new version is stable. As always there are bugs, but they don't influence the stability of the system.
Also a good improvement is that Blackboard is now certified for use on a 64bit platform. This gives us the possibility to beter use the available memory.

Portfolio
There are no improvements in the portfolio system. Some of the bugs we reported were fixed, but also new annoying bugs were introduced. The Blackboard portfolio system still got much more potential. It can't be all positive!

Learn from building blocks
I think that Blackboard is now much beter in learning from building blocks. They finally improved the group management. Although the content of the course is now, by default, saved in the Content System, groups still can't use the functionalities of the CS within the Group File Exchange.

Security
During our last NLBBUG-meeting in Amsterdam we had a good discussion with Mark O'Neil from Blackboard. Mark is setting up a Security Squad to improve the resolve time of security bugs. Blackboard is improving on their security, but it's going slow. For Blackboard, as a mission-critical system, security should be of the highest priority. We are not there yet, but it is progressing.

Standards
I'm very positive of the improvements Ray has accomplished with support of standards in Blackboard, but also on introducing more openness. Good example is the opening up of the database. It legalises the things we were already doing ;-)

When Ray started at Blackboard I was positive of the things he said. After a year, we can see that it weren't just words. He is really changing Blackboard!